With The Book of Mormon playing in the West End at Prince of Wales Theatre, Lewis Cornay has recently finished his run as Elder Cross after joining the cast last year, and amongst his many other professional roles, he toured with Titanic the Musical in 2018 and made his West End debut as a child actor in The Sound of Music. Lewis has written his own musical called Snowflake, which has previously had rehearsed readings, and as a keen photographer, has his own headshot photography business. Next month, Lewis will be performing at The Turbine Theatre at the sold-out Roles We’ll Never Play alongside other West End stars. We caught up with Lewis about his time in The Book of Mormon, touring with Titanic and his plans for Snowflake.

You’ve just finished your run in the West End production of The Book of Mormon, how did you find your time in the show?

It was a really valuable experience. Doing the same show for a year can sometimes seem like both a blessing and a curse. The obvious blessing being that you’re IN THE WEST END LIVING YOUR DREAM!!!!! But repetition can become a bit stunting to creativity if you’re not careful. And I tried to treat each show as if it was fresh.

He was a joy! If I was having a bad day it always felt really nice to come to a character with such upbeat, positive energy. The great thing about the show is the amount of multi-roling. For instance, I’d go from being a happy-go-lucky Mormon to a 19th century woman to a devil (to name a few)! So, you don’t really have the chance to get stuck in any particular character.

Had you seen the production before auditioning and how did it feel booking the role?

Yes! I won the front row lottery when I was about seventeen. Since then, I was determined to be a part of the production, so it was an amazing feeling to get the job. Also, it felt like a luxury to know I’d be employed for a year after coming from shorter contracts.

What will you take from your time in the show?

I will take a lot with me from the show. One thing will be the importance of stamina. Doing eight shows a week, it was so important to keep fit and healthy to do the job the best I could. I want to keep up this fitness as much as possible! You can catch me singing on a treadmill in a PureGym near you…

How did you find the experience touring with Titanic?

I loved it! It can be a bit daunting to be away from the stability of home but it felt like a real adventure to get to experience all these different places. A tour also really brings a cast together, and I liked that family atmosphere.

What did you enjoy most about being part of the production?

Actually, there was also a fair bit of multi-roling in this show too – SPOT A THEME – and I really liked that. I think my favourite part though was getting to sing that beautiful score. I will never tire of hearing the glorious opening music.

What was Paw Patrol Live: Race to the Rescue like to be involved with?

My first job out of drama school, it really was a baptism of fire! Three shows a day and constantly moving around the UK. But it was a brilliant opportunity. I got to play a boy that so many children look up to and play Wembley Arena!? It was really lovely to see just how excited the kids got when we went on stage.

How was it performing in Just So – The Musical at the Barn Theatre?

I learnt a lot on this job. My first actor-musician production and found myself playing the guitar a lot more than I would’ve imagined! It was nice to be in a production where I was given permission to really make the character my own. And with the addition of instruments, it was a creative challenge that was very inspiring.

You’ve previously performed at Roles We’ll Never Play, what was this like to do?

So much fun! It is wonderful to get the chance to try out something completely different and catch up or meet new friends! I will be singing at the next one in March, so grab yourself a ticket!

You performed as a child actor in a few London shows including Mary Poppins, what do you remember from your time performing as a child?

All a blur due to the years of therapy. Just kidding. It was magical! At the time it really felt like no big deal, it was just what I did. But my oh my what I would give to play Michael Banks again. I’ve decided there is still time… 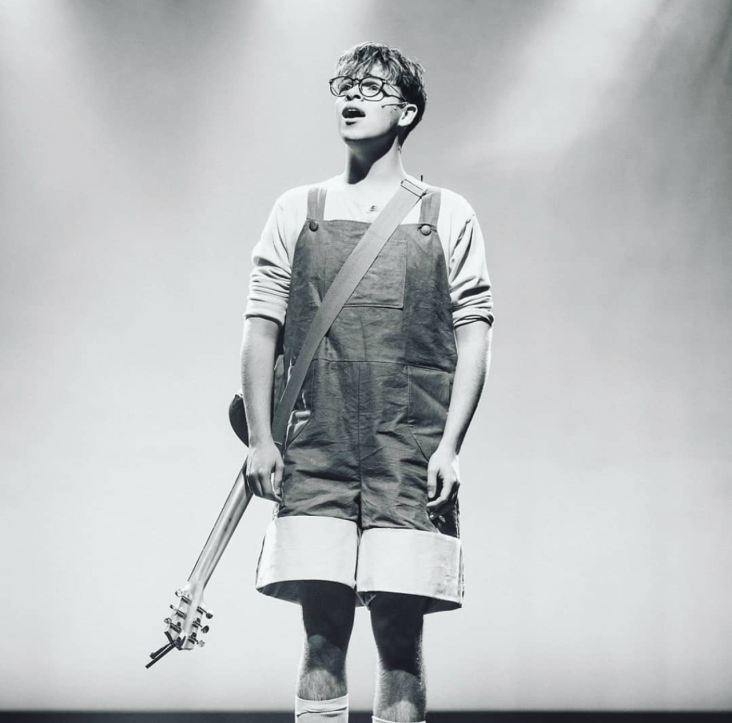 We understand you’ve written a musical called Snowflake, can you tell us more about this?

Yes! I’ve been working on the show for about a year and half and after a couple of readings I am looking forward to workshopping it this year, and hopefully mounting a production. I’m really proud of the piece and I hope it will resonate with audiences.

How did your headshot photography business come about and have you always had an interest in doing this?

I’ve always been interested in photography. I like getting the chance to find the beauty in the unexpected. When I was training, I started to take headshots for the foundation students and got good feedback from drama schools. Then when I started Mormon, I thought it was time to properly invest in some new kit and start to branch out more. I absolutely love it!

How was your time at Guildford School of Acting?

Drama school has its ups and downs, which is to be expected. For me personally, it was definitely as much a chance to learn about myself as an individual as it was about the training. I met the most incredible friends and learnt some really valuable life skills. Sometimes the environment can feel a bit claustrophobic and people can be tempted to place you in boxes. So it felt quite liberating to graduate and do a range of work that some might not have expected of me.

What plans do you have over the next few months?

Well, I’m currently living my best life in Australia! And then who knows. There is a lot I want to achieve with my writing and have some ideas I want to make a reality. I also want to diversify with my acting and find new and exciting opportunities. I’m looking forward to it!