Having released his first studio album, Adventures in Real Time, in 2014, earlier this month, Dylan Gardner returned with his second album, Almost Real. In between the release of both albums, Dylan could be found writing new music and touring America on his own headline tours and supporting fellow musicians. Wanting to find out more about the new release, we spoke to Dylan about Almost Real, designing his artwork and the response so far.

What can people expect from your new album, Almost Real?

They can expect a fun emotional album experience from start to finish that will have them singing at the top of their lungs and hopefully relating to themes of the album’s lyrics!

How long was the process from start to finish?

I finished my album “Adventures in Real Time” in late 2013 and the record came out in early 2014. I went on a national tour which helped shape my point of view (and life in general) to start writing the second record. The first real start was the ASCAP writing trip in Nice, France I did in September of 2015. I wrote “I Want It Like That” and “The Way It Goes” that week. From there I met producer Matt Rad and we started work on “Almost Real” as soon as we got back and finished in late 2016.

Were there any songs that were close to not making the tracklist?

The tracklist changed many times but the biggest outlier was “Hysteria”. There was originally supposed to be another song from the ASCAP trip in its place, but I felt dissatisfied with the track and brought in “Hysteria”, which I had written earlier that week to record as a B-side. I had fun and just let loose on the track and when it was finished, I knew “Hysteria” had to be on the record instead.

Which song was the last to make it to the album?

“Hysteria” as explained in the last answer, but before that “Sign Language”, which came into the game late after recording the other nine to ten songs slated for the album. I had always heard about the big singles from a lot of records coming in last to the recording process, and “Sign Language” ended up being the first single from this record, so another tale for the cause!

Are there any that you kept back for future release?

So far no, but you never know! Someday I want to release all my B-sides because there’s a charm to all of them, going all the way back to the first stuff I did in 2012 on my first EP. I still love a lot of it like a long-lost child.

How different is this album to your first?

When writing and recording “Almost Real”, I honestly felt like it was no different, in terms of me not going “okay, I’m going to do THIS instead”. I just did the same process as the first where I tried to write the best batch of songs I could and pick the best eleven. I learned how to engineer and produce better on this record so the sound quality definitely sounds more “radio-ready” you could say. Looking back, the themes of the album’s lyrics are the most different, being a little more personal and rawer than the first album.

Great! When I put out my first album, a few people on Twitter and Instagram shared it like, “hey, check this out!” and that was about it until Spotify blew it up later. With this record, there were thousands of people that listened to it right when it dropped at 12am that late Thursday night and we sold out of pre-order merch, so that alone was already so overwhelming to me because it means I’m moving in the right direction!

How did you come up with the name for the new album?

It was going to be called “Passenger” which I thought fit the album’s lyrics but then when looking back at the lyrics, which were mostly about the transition from a teenager to an adult (nineteen into twenty), “Almost Real” really signified that change and a wink at my journey as an artist!

Who designed the artwork?

I drew all of the artwork on the album, which was something I would have never guessed going into this record. The amazing people over at SMOG designs (Jeri and John Heiden, Ryan Corey) who worked on the first album’s artwork, saw the doodles I did on the moodboard for the artwork and said “wait, why don’t you just do the artwork?” So I bought some supplies and raced home and did nothing for two weeks but play psychadelic vinyl records and draw until I fell asleep with a pen in my hand. Now I do all my lyric videos and I’m getting more into making art in general.

Have you played all the songs from the new album to a live audience yet?

I did an album release weekend tour in LA, Vegas, and AZ where I played almost every song off the new album and the audience knew the words to most of the songs surprisingly! I was in Arizona and I went to go sing the chorus of “Can’t Stop Thinking” and suddenly it sounded like the record because the crowd knew all the vocal cues!

Will physical copies be available to buy on Amazon UK in the future?

Oh I’m sure! Are there not right now? All merch and vinyl copies of the record are available on my website dylangardner.com and we ship anywhere in the world!

Have you got a tour planned as yet?

Currently working towards it as we speak! Stay tuned and just keep up on social media because that’s coming soon. 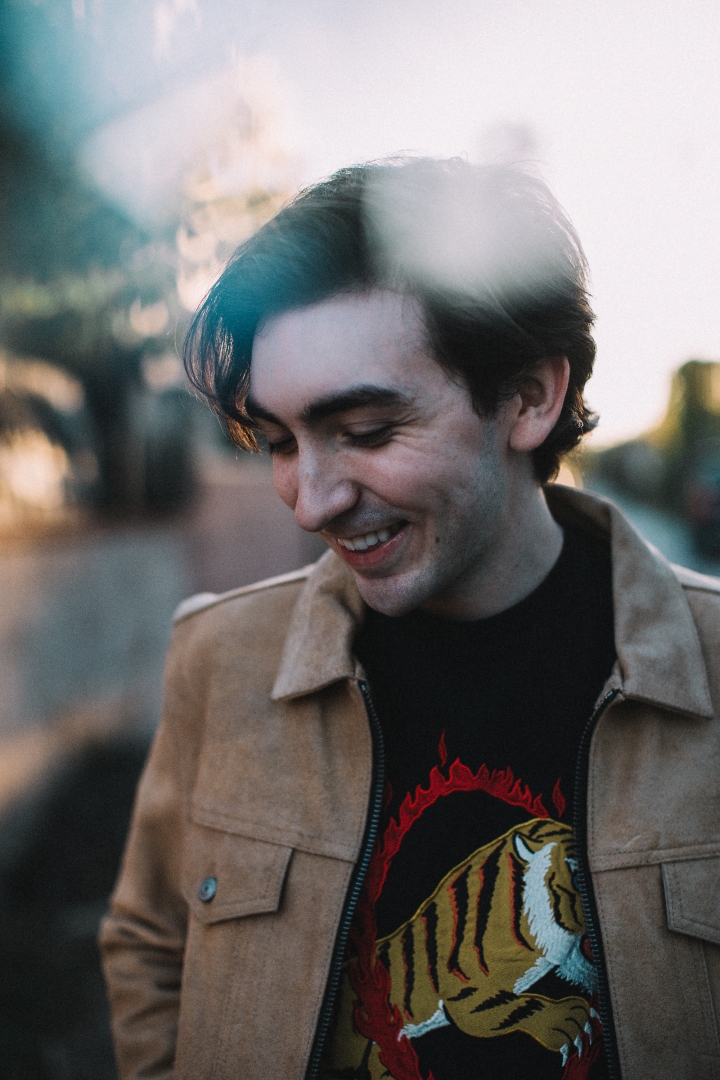 In our last interview, you mentioned your number one dream is to visit the UK, is this any closer to happening?

Right now I’m independent, so all touring and traveling is self-funded. It’s still my #1 dream to visit there, and my Spotify numbers have actually been increasing and increasing in the UK, so it will definitely happen in the future!

Last year you told us that Lorde, St. Vincent and Perfume Genius impressed you with their music; has there been anyone who’s impressed you so far this year?

Charli XCX’s “Pop 2” kicked my butt in the same way “No Shape” by Perfume Genius did. It made me realise that some of the best pop music ever being made is coming out right now, and when I heard “Pop 2” I realized that the future of modern pop music is going to be great. It’s got me going to make my next record!

What’s your plans for the rest of the year?

Right now the main objective is to tour and promote “Almost Real”. I want to rough it out the road all year and reach as many new fans as possible. I’m also writing all this time for LP three so I’m very excited for the future.