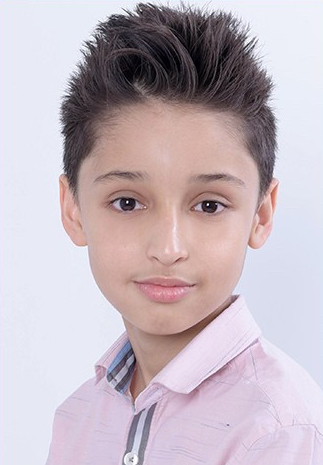 Young actor Adam Rauf made his professional acting debut earlier this year in the hit movie Bohemian Rhapsody playing the role of Young Freddie Mercury. Adam got the chance to work with Rami Malek, who played the older Freddie, and walked the red carpet at the London Wembley Premiere with his co-stars and Queen members. Chatting to us recently, Adam tells us about playing Young Freddie, watching the cast transform into character and meeting Brian May and Roger Taylor.

What inspired you to become an actor?

I have always loved watching movies and always knew I wanted to be an actor ever since I was about five years old. I was often told I belong on the big screen from the age of three because I was always singing and dancing and copying scenes when out in public. I would imagine that I was the actor on screen and would act certain scenes out, especially when I watched movies like Home Alone with Macaulay Culkin (yes – I did set up a few traps in the house!), Big with Tom Hanks (I still sing the ‘Shimmy Shimmy Cocoa Pop’ song), Back to the Future with Michael J. Fox (I wanted to be Marty McFly and have my own DeLorean time machine!) and Daniel Craig in Spectre (I even used to go by the name ‘Adam….Adam Bond!’) I was inspired by so many actors and how they almost have to wear an invisible mask and become someone completely different to who they really are off-screen.

What was it like being cast as young Freddie Mercury in Bohemian Rhapsody?

It was the best feeling in the world! Knowing I would be an actor and play Young Freddie Mercury was the best moment of my life. I looked into the similarities and there were so many. Although my name is Adam, I was nicknamed Addy ever since I was born and saw the similarity in our names (Freddie/Addie) and my mum’s name is Farah which has part of Freddie’s real name in it (‘Far’rokh). I researched pictures of Freddie Mercury as a schoolboy and read that he was a parsi and played the piano. As a Persian schoolboy myself who plays the piano, I felt like it was meant to be as it all seemed to fit. The moment I knew I was cast, I learnt how to play Bohemian Rhapsody on the piano. I met the director, Bryan Singer and discovered that his son shares the same birthday as me! There were so many connections.

When did you find out you had got the role and what were the auditions like?

The casting director, Susie had wanted to see me and immediately said I looked like Rami Malek and she wanted to see me act. She was just so lovely and wanted to know more about me and made me feel so at ease and asked me to act out some scenes. I just imagined that I really was the young Freddie and thought about what he would have done and put on my best performance then hoped and prayed I would be the chosen one. Within six weeks of the casting, I was told that the Bohemian Rhapsody team wanted to book me as Young Freddie Mercury – and I will never forget that day when my mum told me the news. I was the happiest boy in the world and started singing “We Are The Champions”!

How much time did you spend on set and what was your experience like?

I spent a few days on the actual set for the filming and had several fittings done before the filming began. The experience was so incredible from meeting the cast and crew to acting out the scenes as Young Freddie Mercury. The cast and crew were all so amazing to work with and made me feel so special, so comfortable and well looked after. I looked forward to every moment that I was being picked up for my costume fittings, hair and makeup, teeth fittings and filming on set. The entire experience was by far the best experience of my life and I got attached to everyone and still miss them.

Did you know much about Freddie before appearing in the film?

I knew who Freddie Mercury and Queen were from a young age as my mum and I listened to many of his songs (especially Bohemian Rhapsody, We Will Rock You, We Are The Champions and The Show Must Go On) and I even used to sing “Mama….” around the house when calling my mum. My mum even has a recording of me singing it!

Did you spend much time with the rest of the cast?

I spent a lot of time with the cast, especially Rami Malek, my on-screen parents, Ace Bhatti and Meneka Das, all of the production crew, especially the amazing Joe Barlow and the director of my scenes Dexter Fletcher, who always made me laugh – he’s so funny and I loved being on set with him! To be honest, the cast and crew were just like a second family to me since I spent a lot of time with them. Rami was such an inspiration to me and I remember him saying that one day I will play an even bigger role that might be even bigger than all of his! He is just incredibly good-hearted, so caring and he taught me so much. I loved every minute of being the younger version of him and hope to be just like him one day.

Were you able to see Rami Malek, Gwilym Lee, Ben Hardy and Joe Mazzello in character?

Yes, I was able to see Rami, Gwilym, Ben and Joe acting out their scenes and was able to see them in costume, hair and makeup and saw them transform into the Queen band members. It was so amazing spending time with them and seeing Rami become Freddie – he looked exactly like Freddie and behaved exactly like him! Rami and I had matching teeth too that were especially made for us as we had to wear big fake teeth as Freddie Mercury. That was incredible too! I loved watching them act – it was so inspiring to see and I remember thinking this is all I want to do for the rest of my life. Rami has to be one of the nicest people I have ever met both on set and off set and someone I really look up to. He was like an older brother to me and I would love to work with him again. 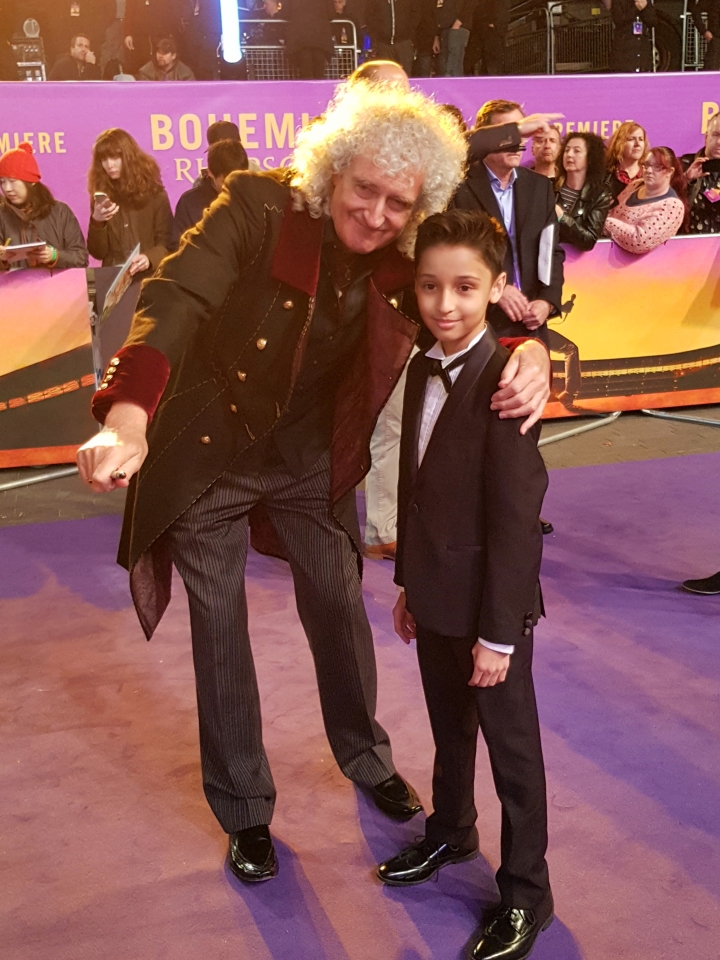 What were your family and friends response from your appearance?

My family, friends and school teachers were and are so so proud of me for landing the role of Young Freddie Mercury. My mum and my uncle were the proudest and cried when they knew I had got the part. When they saw me on the big screen, they were so thrilled because they always told me I belong in the movies and should be performing ever since I was a little boy. They were just so happy seeing me live my dream. I always want to make them proud because they are the most important people in my life. My mum has worked so hard to raise me on her own so all I ever wanted to do was make her proud. Mama… [in Freddie’s voice]… This was for you!

What was it like meeting Brian May and Roger Taylor for the first time?

It was an incredible experience to meet Brian May and Roger Taylor especially as they are the actual band members from Queen! They were so inspirational, kind and friendly and were so pleased for me for getting the role and gave me lots of amazing advice for my future acting career.

How did you find the premiere at Wembley?

It was the most amazing experience to be able to share the red carpet with Rami Malek, Gwilym Lee, Ben Hardy, Joe Mazzello, Lucy Boynton, Brian May, Roger Taylor, Thomas Newton Segal, Graham King, Jim Beach, Denis O’Sullivan and the rest of the cast and crew. I loved dressing up into my tuxedo for the big event and I was so excited to be reunited with all of the cast and producers. As soon as I saw Rami, he gave me the biggest hug and it was the best feeling to be able to see him again. It was so exciting with so many photographers taking photos of me. Rami and I posed together as the two Freddie Mercurys and I had photos taken with Brian May. All of the cast and crew were then invited to watch ‘Bohemian Rhapsody’ on the big screen in Wembley and it was the most amazing experience and I felt so incredibly lucky to be part of it all.

Bohemian Rhapsody is your professional acting debut. How does it feel having such a big production as your first role?

It really is the most incredible feeling to have Bohemian Rhapsody as my professional acting debut and to play the role of young Freddie Mercury – words cannot even describe the feeling of playing the role of the biggest music legend of all time. It has been a biopic that has been many years in the making and the most anticipated biopic of all time. I remember thinking that timing is everything when I discovered Bohemian Rhapsody was originally announced in 2010 and that if it was made eight years earlier when originally planned, I would have only been one year old and wouldn’t have been cast… so maybe they were waiting for me to grow up to make it happen!

Was there anything you learnt when filming that you think will help with your career?

I learnt how to improvise another character when on set and to express myself to show the different emotions of that character depending on the scene I was doing. I have always had a very good memory so I found it easy to memorise my lines for each scene. I learnt exactly how much time and effort goes into making movies and how they are directed with a huge production crew who film the same scene again and again until it’s perfected. There is so much attention to detail when each scene is created, from creating the setting, the costumes and the makeup, the importance of showing the right expressions and emotions when acting the scene out and moving your audience. After this incredible experience, I feel confident and completely ready to take on any movie! ‘I Want to Break Free’ so ‘Don’t Stop Me Now’!

What types of films do you enjoy watching?

I love watching different varieties of movies including action, comedy, fantasy, adventure, mystery, thriller, animation, superhero, musicals and sci-fi and of course biopics, especially as I’m starring in the most incredible biopic of all time!

What do you hope 2019 brings for your acting?

My biggest hope and wish for 2019 is for it to bring me many more exciting acting opportunities as acting is what I was born to do. I love becoming a completely different character who goes back to being Adam as soon as I am off set. I am so unbelievably grateful to have been given the opportunity to play the ‘Young Freddie Mercury’ and want to say the biggest thank you to everyone who made this possible for me. I am just a little boy with a big dream to star in many more movies alongside all of my favourite actors that inspire me to follow my dream of being an actor and to make it happen. Freddie was right… for me… “The Show Must Go On”!