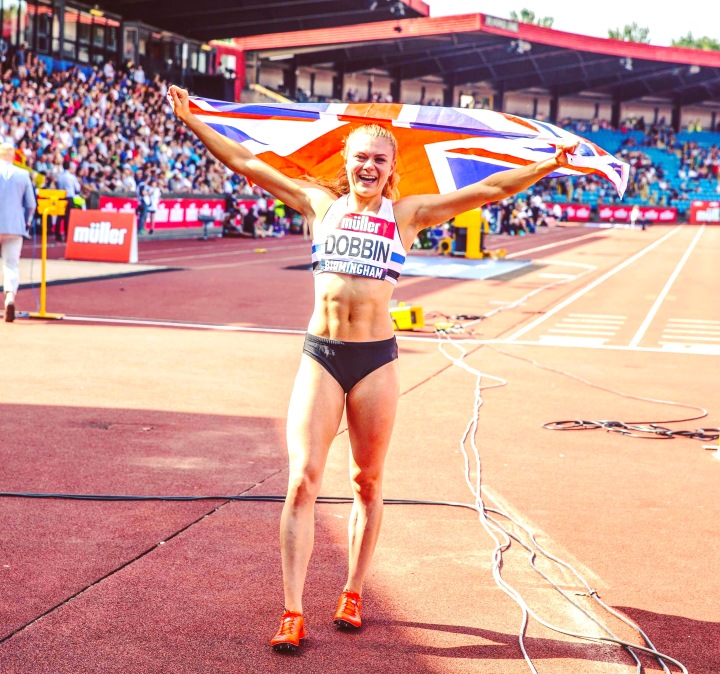 Scottish athlete Beth Dobbin has recently returned from her European Championships debut where she reached the final in the 200m sprint. This year saw Beth break the 200m Scottish record which had been held for thirty-four years and in July she competed in Birmingham where she became the British Champion. Chatting to Beth, we find out about being called up for Team GB, what she hopes the next few years bring and winning the title in Birmingham.

What was your first athletics experience?

I remember participating in cross countries at primary school so I got into athletics through that route. I always won a medal but never managed to finish first so I then swapped to the sprints.

Was there anyone that inspired you when growing up to get into the sport?

My dad definitely inspired me as he used to be a footballer. He retired quite old so whilst I was growing up I always remember him doing exercise round the house and being very active. I started running with him from a young age. I fell in love with the feeling of exercising hard and pushing your body.

How did you feel becoming British Champion?

It honestly felt like a dream come true. The happiest moment of my life, particularly because it was one that I thought I would never get. It’s a huge achievement and I just look back on the day with pride. Holding the flag was something that will stick with me forever as a special memory. It’s only now I’ve ended my season that I can begin to really enjoy what I’ve achieved. 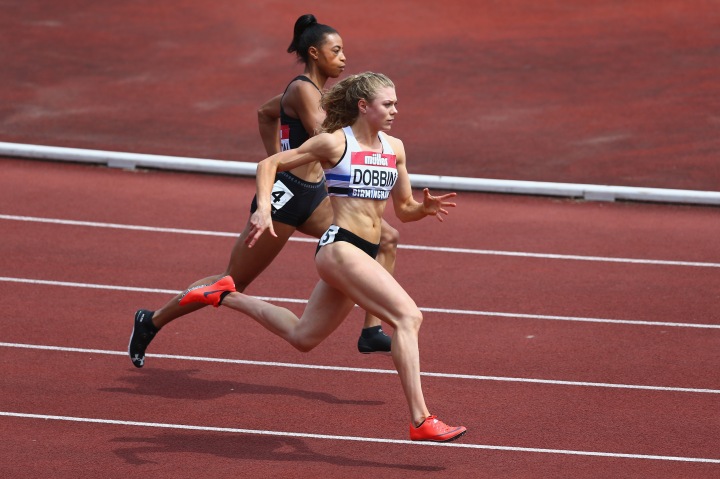 Have you always raced at 200m?

When I first began sprinting it was the 100m I did but I was never very good at it. Then my coach at the time noticed that in sessions I was strong in the longer distances so I tried a 200 at the end of the season. The following year we decided to do more 200s and I ended up winning a silver medal at the English Schools. Prior to this I had never been able to make the team for the 100m.

How did you find your first European Championships?

The European Champs were absolutely amazing and I loved the experience of being on the British Athletics team. I feel that I have learnt so much about major championships as it was completely new to me having never even made a junior team before. It has made me want to be a part of the team every single year now.

How do you prepare on the day of a race?

This has been a learning curve at the Europeans as I’m used to racing during the day time at lower level competitions. Here I would try and eat a big breakfast and then head to the track quite early to prepare. However at Europeans I was racing in the evening so I took tips off my roommate who suggested having an early and late lunch so I would have enough energy to get me though my race. I also like to listen to music and try and treat it like a normal day to calm the nerves.

How do you stay focused when on the starting blocks?

This is something I have got better at over time. Now I like to completely clear my mind so that when the gun goes I can react to it quickly.

Can you describe the atmosphere when competing at a major event?

I was so grateful to have the opportunity to race at the Athletics World Cup before the Europeans as nothing could have prepared me for what the crowd is like at a major championships. I’d only ever seen it on TV before and it looks completely different to that, the crowd feels so close and it was quite overwhelming. At the Europeans I felt much better prepared for this as I knew what to expect so I just soaked it up and enjoyed the euphoric feeling it gives you.

When did you realise you had broken a 34-year-old Scottish record?

Pretty much straight after my race. I couldn’t see the clock as I crossed the line and one of my teammates shouted the time to me. At first I thought it must be wrong but then when it was confirmed my first thought was ‘wow, you’ve gone sub 23’. The next thought was ‘omg that’s the Scottish record’. Last year I was thrilled to go sixth on the all-time list so to hold the record is an unbelievable feeling.

What was it like being called up for Team GB for the first time?

A complete dream come true. It has always been a lifetime aim that I thought I would never ever achieve in an individual event. I thought the only way I would ever get one would be a relay spot if I was lucky and I managed to do well over the 400m in the future. I have dreamt of representing GB for about eight years since I started taking athletics seriously and to finally do that was such a proud moment.

Where do you do most of your training?

I’m based in Loughborough so all of my training is here at the University.

What’s the most challenging part of your training routine?

Having to train after an eight hour shift at work. I usually start training at 3:30pm after I’ve been working 7-3pm that day. I feel drained but I somehow have to pick myself up and motivate myself to train. It is really hard at times, especially if I haven’t slept well the night before but this summer has made it all worth it.

At what age did you start taking athletics seriously?

I was about sixteen when I started doing well over the 200m and taking it more seriously. Before that, I was still quite serious but it was more for fun.

When is your next competition?

My last competition of this season was the Europeans. There was a couple of more races after but I felt that the season had been an absolute rollercoaster and I needed a bit of a break. I had also opened my season at the start of May as I never thought I would be racing at the Europeans so it did feel quite long. I’d also taken a lot of time off work for Europeans so needed to go back to make my shifts up that I had missed.

What do you hope to have achieved in the next few years?

I want to continue to make teams and the ultimate goal is to be an Olympian. That would be an absolute dream come true.