Actor Eric Todd, best known for his role as Frankie Belmont in TV series The Sinner, shown on Netflix in the UK, got into acting after auditioning for a school play. Recently Eric decided to move from New York City with his wife to her home country of Norway, where a new chapter will begin. Speaking to us we find out about filming for The Sinner, being a part of a Golden Globe nominated production and how he got into acting.

Did you enjoy your time on The Sinner?

It’s my favourite project I’ve done thus far. Meaty part, amazing cast and crew to work with, not sure how much more I could have asked for. Jessica Biel is an incredible human being. I can’t say enough good things about her. She’s one of the most down to earth people I know. She would just as gladly sit around and chat with extras as she would with her co-stars. She cracks jokes and messes around and has a blast and she brings that energy everywhere she goes. Not only is she a fantastic person, but she’s a phenomenal actress, I mean she would be laughing at one of my dumb jokes one minute and then the next minute, they would call action, and she’d be sobbing in front of the camera. After working with her I realised that she is the type of actor I aspire to be. I don’t take myself seriously. The only thing I take seriously is honouring a story.

How was it filming the stabbing scene?

So slow haha. Painfully calculated (no pun intended). This scene was the most important scene in the pilot and we knew that, if we wanted to be picked up to series this scene had to be perfect. The man doing all of the blood was one of my favourites. I can’t remember his name but he’s old school and loved his job. He was so into it.

What does it feel like being part of a Golden Globe nominated series?

That was a bit surreal and I was humbled. It’s still hard to wrap my head around the fact that I was a part of a show that was nominated for Best TV Mini Series. We may not have won in the end but the fact that we were up against such a terrific show, Big Little Lies, is just a huge honour.

Did you get to watch the series before it hit the screens?

Nope, I had no idea. First time I saw it was when it aired and we were filming the final episode on set. Jessica was like, “Eric! Come here you’re about to die!” I was just like, “boy I hope this doesn’t suck”. Turns out people loved it. As my mother always said, “Prepare for the worst, hope for the best.”

How would you describe your character, Frankie Belmont?

Frankie is a very genuine and loving guy who sees the best in everyone but he makes a huge mistake and instead of taking ownership of it, he hides behind his privileged life. He has a choice to make and he chose to hide and the rest of his short life he spends living with the truth that he’s a coward. He never forgave himself and he was ashamed of who he was, hence why he didn’t fight Cora when she was stabbing him on the beach. The moral of this story is: Be a good guy but have a little bit of a backbone or else you’ll be stabbed. Repeatedly. Literally and metaphorically. Philosopher Eric Todd over here if you need any more complex metaphors.

How did you get into acting, did you attend theatre school and what was your first role?

I went through high school planning on being a professional bicycle slopestyle rider. I broke a lot of bones. I crashed one day while in a competition, slammed my head, cracked my full face helmet into two and had a brain hemorrhage. I discovered acting shortly after when, just for fun, I auditioned for my high school show Hamlet my senior year looking to get a small part. They cast me as Hamlet and I went “oh s**t”. So I learned quickly and found that I enjoyed acting and was somewhat decent at it. This was the time I was applying for colleges and I had heard about these “acting conservatories” briefly. I asked my drama teacher if she honestly thought I had a shot and she said yes. So I applied last minute to a bunch of conservatories, auditioned in NYC for them, got into all of them and ended up going to University of North Carolina School of the Arts. It was an awesome program, it still is. God awful social life, I felt like a hermit crab in a tank full of goldfish, but it was incredible training.

What was it like on set of A Cure for Wellness?

Anyone who’s done anything on film can tell you, everything is “hurry up and wait”. Just to put things into perspective, I appear on screen in that movie for thirty seconds. That thirty seconds took close to eighteen hours on set to film. It’s an art and a science and every moving piece must be perfect. What was cool was that Dane DeHaan (the lead in the movie) and I actually went to the same conservatory (UNCSA). He graduated a year before my first year. And Gore Verbinski might be the calmest, kindest director I’ve ever worked with. I’m pretty sure I’d be completely mental if anyone ever put me in the directing chair.

How different is it filming a TV series rather than a film?

It’s not that much different honestly. The main difference is the time you have to invest as an actor on set. With TV you have a much larger amount of filming to do for an entire series. A movie lasts two hours or so. It’s time that’s basically the biggest difference from my experience.

Is there a way people in the UK can watch your short movie The Break?

Haha! I don’t think so. Currently, it’s going around some short film festivals. Once it’s done there our director Sam Roukin (Turn, Harry Potter and the Deathly Hallows, SHIELD) might make the video public or it may never be seen by another living soul. We’ll have to wait and see together.

Have you done theatre during your career?

While at school we only did theatre, however, I’ve never had the opportunity of doing theatre professionally. Part of me doesn’t mind because it is such an underpaid job within the acting community but it’s hard to beat the raw artistic beauty of theatre and I find myself missing it quite a lot these days. Maybe one day here soon.

Do you find learning your lines easy?

I’ve been doing it now for close to ten years and for me, it’s never easy. I keep expecting it to get easier but it doesn’t. I just become more numb to the pain of it. I’ve found ways that make it easier for me but it takes me a long, long time. I have friends who can look a page over twice and recite their lines word for word. It makes me angry as I sit there and struggle to remember the first two words haha.

Oh boy, I would love to work with Quintin Tarantino. I’ve watched his films growing up and I think he’s a genius and his movies are brilliant. Also, I’d love to work with Day-Lewis, Tom Hardy, and Michael Shannon. Funny story, I saw Michael walking down the street a few months ago. It was 3am and my wife and I had been out at a bar with some friends and were walking home. Suddenly my friend David turns to me and goes, “Bud. That’s Michael Shannon over there”. I look over and, sure enough, there’s this super tall gangly man stumbling drunkenly down the sidewalk next to us. David goes, “We should go take a picture with him. I love the guy, you love the guy, it’s 3am. Why not?” Just then a different guy passes him, realises who he is, and asks for a photo to which Michael begrudgingly agrees. They take the photo and Michael moves on. David and I look at each other and are about to approach him when, all of a sudden, Michael stops walking. He throws his head back in the air with his arms spread wide and, looking like a drunk and angry angel, he shouts “F**K EVERYONE!!” David and I decided we didn’t need the photo after all. 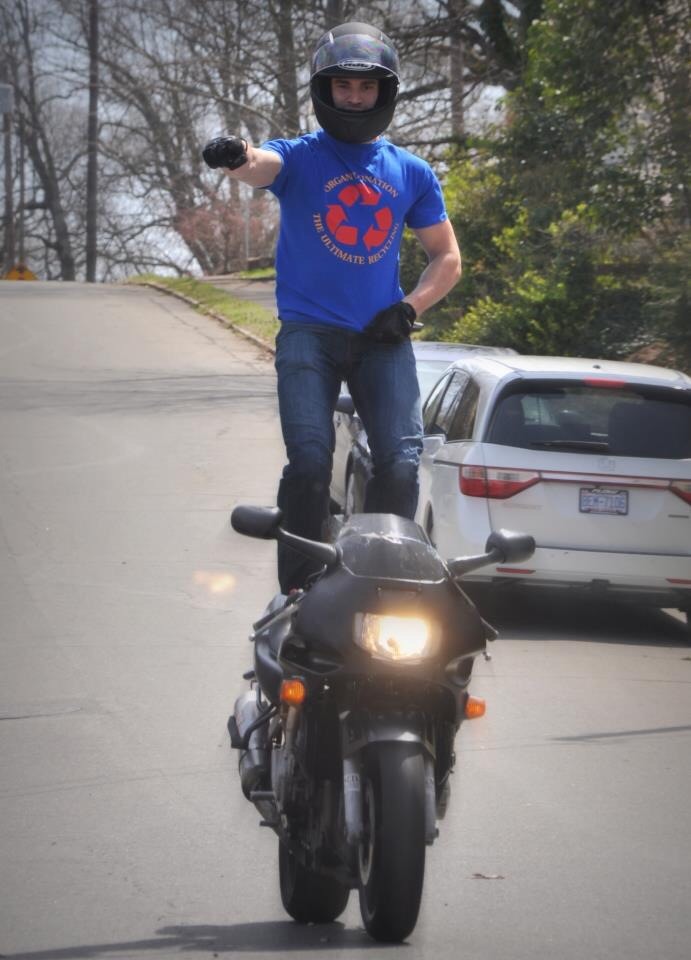 What do you enjoy doing in your spare time?

I love downhill mountain biking, XC skiing, and snowboarding as much as I possibly can. Other than that I’ve discovered I’m very good at video games. And sometimes my wife forces me to run with her and I feel like dying.

Are there any genre of films you’d like to star in that you haven’t already?

Yeah. I think probably most of them hahaha.

Do you have any roles coming up in the near future?

Nothing set in stone, so I’m still on the audition grind. However, I’ve moved to Norway with my wife here this past January (she’s a full-on Viking). New York City is exhausting and draining. My wife, Elise, was about to move back to Norway when we met. She had stayed in NYC for an additional four years for me so that I could pursue my acting career. I’ve had some success here and there but nothing really that I could sustain myself on, let alone a family. I want a family as does she. We want to be able to relax and enjoy our lives and not have to worry about working 50 – 60 hour weeks to live comfortably. I think that if I stayed in NYC and continued doing what I’m doing, I could be very successful in the next five years. Things have really picked up after this show aired. But I’ve come to realise that I value family more than my potential career. And if I was to stay here I think I would self destruct. Besides all that, there are all of the benefits that the Norwegian government offers, its beautiful landscape, and my wife’s family being so supportive and welcoming. For us, it’s a pretty easy choice between starting a family in NYC or Norway. In the meantime, I self-tape when something comes my way. So it’s possible something else may happen for me in the acting world, but it’s also possible this is it. Either way, it doesn’t matter much to me as I’m happy with where I am in my life.