Young Scottish singer Jodie Knight, recently seen on ITV’s The Voice, released her latest EP “Pause” in January this year. Spending the next few months away from her hometown, Jodie will be continuing her music and hoping to get gigs lined up in the near future. In the midst of her busy schedule, we find out about her already released music, her experience on The Voice and what she’s been up to since the show.

How did you get into music?

I’ve always loved listening to music for as long as I can remember, but it wasn’t until I was about eleven that I started to sing in public. It was actually so random, I decided to audition for my school’s talent show in S1, I have no idea why I decided to as I’d never really sung in public before! It was one of the best thrills, and people seemed to like what I was doing so from then on I got my brother to teach me some songs on guitar and it all just grew from there!

Can you tell us about your previously released EPs?

So, I released my first EP in May 2015, called You’re The Only One, and my second, Pause, I just released in January 2018. I’ve been working in a recording studio with the producer Jud Mahoney since around 2013 and after a while of just recording songs we decided to do something with them and release them! I’ve still got more to release that we have recorded over the past couple of years.

Would you say your music has changed since the start of your career?

In some ways yes, and in other ways no! The stuff I have released onto the new EP Pause is all very varied, and if you had played me the song Work Harder two years ago and told me that it was me I wouldn’t have believed you. The stuff I write on guitar, like the song Blue, hasn’t really changed. My songwriting skills have developed for sure (thank goodness) but to be honest I just find it so natural to write sad love songs on guitar and not much has really changed in that aspect!

It was a rollercoaster of emotions. The run-up to the actual blind audition was so long and dragged out, and then the audition itself went by so fast I hardly remember it. The day was so frantic as my audition date got changed from the Tuesday to the Monday, and I was told this on the Sunday afternoon and so I guess it did feel a bit rushed! Watching it back on TV was actually far more difficult than I thought, I burst into tears as soon as it came on. It was great to be able to watch what the judges were doing and saying but at the same time, it did hurt A LOT having to watch myself get rejected on national television. For me, the worst part of it was the fact that I didn’t even get a no from them, I had to walk off to the backs of their chairs and never even saw them.

Did you have a judge in mind you’d hoped would turn?

I had hoped either Jennifer Hudson or Olly Murs would turn, and watching it back it seemed they were the two who got into it the most! But to be honest, getting a turn from any one of them would have been incredible. 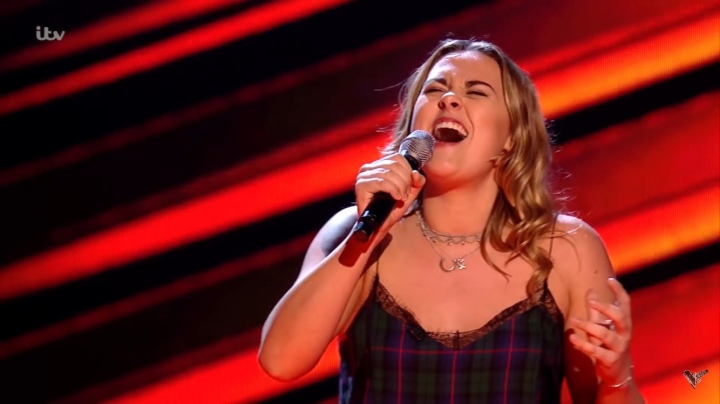 What’s been the social media reaction to your audition?

CRAZY. I was actually on one of the sneak peeks of the week and from the moment that got put up, my social media began to get more followers. Then from the moment my face was on the screen, my phone blew up – it was so unexpected!! I thought that because I hadn’t got through the reaction would be pretty average, but reading through all the messages and comments of friends, family and strangers was honestly incredible, I couldn’t stop crying, everyone was saying such kind comments. Of course, there were some bad ones, but there were way less than I’d expected! Even my parents and my brother who were filmed were saying that their phones were going crazy too – we were all in such shock!!

What made you choose The Voice over The X Factor and Britain’s Got Talent?

I was actually scouted off YouTube to come to the auditions in Glasgow back in June 2017. I thought about it and I guess I liked how it was genuinely all about the voice, and not about how you look or your personality, personally, it just made it seem very real to me.

What advice would you give people thinking of auditioning?

Choose the right song – it’s SO important! The one bit I regret is my song choice, as I didn’t realise quite how important it really is. It has been one of the best experiences of my life, I’ve kept in touch with a lot of the other contestants and been doing music bits with them. Although it was heartbreaking having to walk off to the backs of four chairs, it’s made me want it even more. About four days after my audition, I withdrew my place I had secured at Newcastle University where I was going to study Modern Languages and I applied to music colleges and so it has been so beneficial! Honestly, all I’d say is to give it a go because it’s such a good experience and a great way to build your confidence.

What have you been up to since your audition?

I’ve been gigging and busking a lot, and I actually very randomly got a job working as a Chalet Host out in the French Alps! Not music-related, but I was here on holiday visiting my brother who works here, didn’t want to leave so I called the company on my way home, got the job the next day and flew back out five days later! I’m hoping to get some gigs in the bars out here because it will be so hard to go three months without doing music-related stuff.

Do you still get chance to go busking?

Obviously now I’m out here I don’t, however, around Christmastime I was out loads and I still absolutely love it. It’s so amazing to be able to just rock up to Buchanan Street in Glasgow and play and sing what I want and get paid for it!

What was the atmosphere like at the Christmas Lights Switch On events?

They were so much fun to play – the one at Loch Lomond Shores was my favourite. There were loads of families with young children all excited for Christmas, they were all so adorable. Playing a Christmas song got the crowd into the Christmas spirit so it was great fun!

Can you tell us about the Stand Up 2 Cancer event you attended in October?

It was a very last-minute gig that a friend managed to get me a spot on. It was actually one of my favourite gigs! There were a lot of other performers I knew there and it was such a nice vibe in there I ended up staying right until the very end. Its always good fun doing events like those that you know all the people there are supporting a good cause and having a good time themselves. I actually met another performer there who’s now a really good friend of mine and we’ve done a lot of music bits together so it was a great event!

Have you got any more plans for charity work?

Currently not, but I’m always up for doing any gigs and so I guess it’s just a matter of waiting to see if any more come up that I’m wanted at!

I would absolutely LOVE to perform at festivals. Genuinely it’s a dream of mine to play at one of the big festivals like Glastonbury. Being able to play on a massive stage to a bunch of people is all I want to do and I love going to festivals myself so it would be even more amazing to play at one!

Do you write all your own music?

Yeah, the stuff on the EPs is a collaboration with the producers Jud Mahoney and Natalie Delucia, and the stuff I play at live gigs is all my own. I’ve been trying recently to write with other people because it’s so helpful to see how others work and where they get their inspiration from! I do play covers and stuff when busking because it’s what people love, but I definitely prefer playing my own stuff.

Will you be releasing any music this year?

Like I said, I’ve got a few more songs ready to be released and so it’s a matter of timing. They’re all very summery songs and so if there is going to be a release then it will be around summertime!