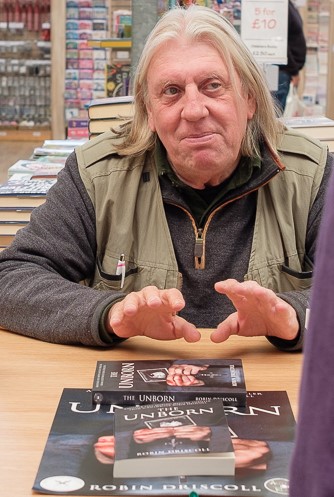 Robin Driscoll over the years has written for TV comedies, becoming a co-writer for Mr. Bean including the series and films, and is now releasing his own mystery thriller novels. To date, Robin has released three books, his debut, Rough Music, in 2017, followed by the Josie King detective series, featuring The Unborn and Still Warm, with all three receiving great reviews. Taking time to talk with us, Robin tells us about the Josie King novels, writing Rough Music and working on Mr. Bean.

What encouraged you to write The Unborn and Still Warm, and will there be a third Josie King thriller?

A good question. I’m used to thinking cinematically and originally wrote The Unborn as an outline for a possible film. I’d already written my first book, Rough Music, and had enjoyed writing through its female lead character, Becky Gordon. So I thought I’d try it again with my new heroine, Josie King. Still Warm is the second in the series, and I’m in the middle of writing the third, Remote. Hopefully out in April. Mmm… and I feel another story for Josie beckoning.

How would you describe Josie King and how long had you planned her character?

When I wrote the film outline for The Unborn, I hadn’t delved too deeply into Josie’s character – only as far as how she would serve the plot. When it came to the book, I instinctively made her strong and intolerant to all the things that get my goat and make me the grumpy old man that I am! It’s fun to have her say and do all the things I can’t or, as a man, not allowed to!

Who do you think these books will appeal to?

Anyone between late teens to a hundred. But crime, mystery or thrillers aren’t everyone’s cups of tea. I do think, though, that the main audience for these genres tend to be women. Certainly, most of the reviews I get on Amazon are from women.

How did your debut novel Rough Music come about and when did you start work on it?

Rough Music was originally meant to be a film and the script was commissioned by Working Title. That was so long ago now that I don’t recall why it wasn’t made. A producer at the time said it would make a great book, but it was at least twenty years later that I took his advice! The book version took five years to write as I was learning on the job, as it were. I’m a bit quicker now, thank heavens!

Did your ideas for the characters/story change over time?

Yes, certainly. When you dream up new obstacles for your characters to overcome, they often call on resources that even you didn’t know they had, like emotional endurance or the ability to talk themselves out of trouble. I think, just as in life, the way characters tackle the problems they face defines them over time. Characters kind of change themselves.

Can you tell readers something about your books?

Rather than take up space here, synopses of my books can be found on my website. But generally, when I told people I was going to start writing books, they expected me to write comedies. But I decided to write what I like to read, which are fast-paced mystery thrillers. Crime related, especially by American authors – I’ve spent a lot of time in various parts of the States and my books mostly star American characters. I do like a good British mystery, though, written by the likes of Robert Goddard and Ann Cleeves. I actually have a mystery in mind set in London, and I hope to write that when I finish the Josie King series.

What do you enjoy about book signings and attending conventions such as the one you did in October for Only Fools and Horses?

Well, as you can imagine, writing tends to be quite a solitary thing, so I enjoy book signings and chatting to people. Many stop for a chat even if they’re not going to buy a book! The Only Fools and Horses conventions and exhibitions are a new thing for me, and it’s great meeting the fans, many of which weren’t even born when the original series was aired over thirty years ago!

You were a writer for Mr. Bean – including the series, movies and animation – what were these like to be involved with?

Working with Rowan Atkinson and Richard Curtis was great fun. Before I knew them, I remember watching the Mr. Bean pilot episode and being knocked out by it. It was so different from Blackadder. When I heard Thames TV were looking for writers for the series, I sent in a stack of sketches a mile high – the humour was right up my street – and was gobsmacked a couple of weeks later when I was asked to join the Bean team. Though I’ve written for other TV comedies, that’s the show most people would know me from.

Is there anything you miss about screen work?

There are some things I miss about working for TV and film. Scriptwriting is a mostly solitary job, but I was lucky to be around on the sets during several shoots. Sometimes, as with Alas Smith & Jones, I’d be there as supporting cast – wearing a procession of costumes and wigs and learning pages of lines on the hoof. I loved watching the filming process in all its many areas and was especially excited to be on the set every day for the filming of Bean: The Disaster Movie in Hollywood. Three months of hard work and great fun! So, yes, there is a lot I miss about working for the screen.

What authors’ work do you enjoy reading?

What are your writing plans for 2020?

Once I’ve finished Remote, the next Josie King story, I’ll down tools and spend the year learning how to market and promote books through social media – how to get the best from Amazon – how to up my profile etc. Luckily, I’ve got young people around me that can teach me all that stuff.

Do you have any advice for those at the start of their writing career for either screen or novels?

I think that when many people start writing a book or screenplay, maybe they start well with a good idea then lose confidence halfway through. Books, certainly, are a massive undertaking. I would advise anyone starting out to simply learn how to do it first. Yes, there’s a book in everyone, but only after learning a few things we think we already know! I’ve often quoted a friend’s advice to me when I started writing my first book: “Even if you were a plumber, you wouldn’t install central heating in your own home without learning how to do it first”. We all have some writing tools in our toolbox, but however good you are there are still a few more tools you’ll need for the job. Once properly tooled-up for the job, you’ll be less likely to lose confidence down the line and more likely to finish your book. I really didn’t want to be one of those people who, when asked how the book’s going, was still saying, okay, thanks, after five years! Read books on writing. Do a creative writing course or trawl the Net where there’s loads of free stuff. Once armed, you can go into battle. And good luck!