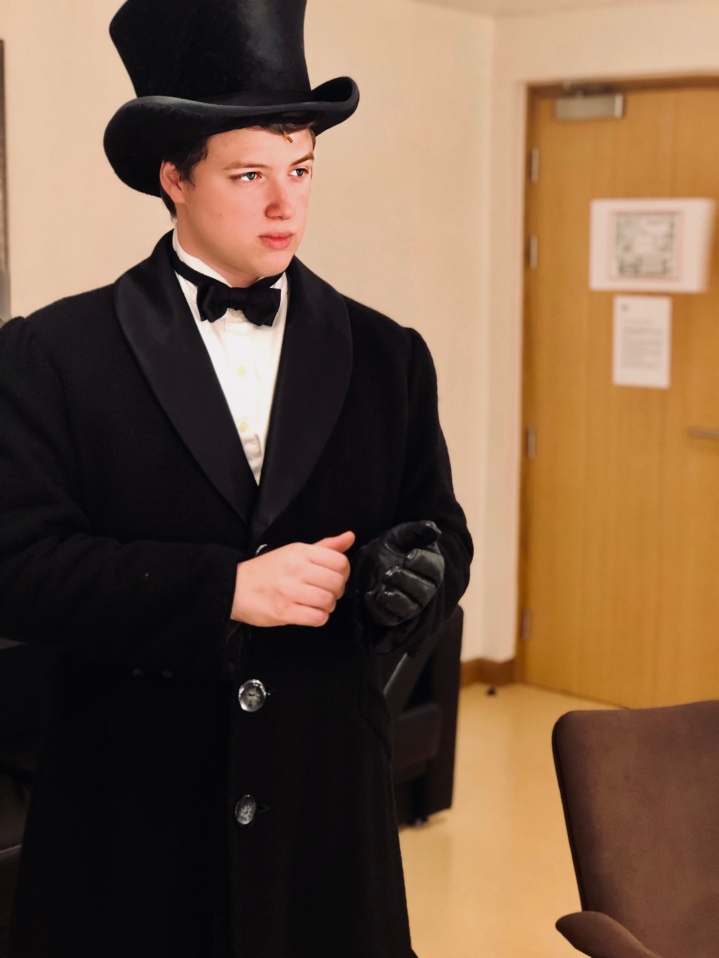 At twenty-three years old, Eric Anthony Lopez made history by becoming the youngest actor to cover the role of Piangi in The Phantom of the Opera, which he is currently performing in on their World Tour until 2021. After making an appearance on American Idol, Eric was cast in an Off-Broadway production before joining Broadway Inspirational Voices, and has also performed in the UK with shows ‘Dido and Aeneas’ and ‘Carmen’. Eric recently chatted to us about touring with The Phantom of the Opera, making history as the youngest Piangi and performing in the UK.

How is your job with The Phantom of the Opera going for you so far?

It’s going fantastic. I got the call in June 2018 and it’s been a crazy time ever since. Getting to be in Hal Prince’s original production of this iconic show is truly a blessing. It’s been a dream since I was a little kid to work there. Truly a dream job. I adore this company and singing Andrew Lloyd Webber’s score eight times a week.

We understand you cover the role of Piangi, what is this role like to portray?

It’s pretty crazy! He is the toughest male sing after the Phantom… it’s the closest thing I’ve gotten to playing a lead in an opera. In the context of the show… Carlotta and Piangi are the stars and they know it. It’s fun to play that dynamic.

You’ve made history by becoming the youngest actor to cover the role at just twenty-three, how does this feel?

I’ll tell you — It’s a title that I wasn’t prepared for and especially in Manila — that’s how fans (PHANS) at stage door know me for. When I was hired, Andrew Lloyd Webber’s long-time collaborator Kristen Blodgette (that lovely woman who frankly is responsible for my association with Phantom) informed me I was the youngest Piangi they have ever had in its more than thirty-year history. For some reason, it didn’t dawn on me that my casting would be a departure from their usual choices, I am just happy for the work. I get to make a living doing what I love eight times a week.

You’ve performed at New Wimbledon Theatre in London, how was the experience and would you like to do more stage work in the UK?

I’m dying to move to London. I’d love to do Phantom in London, frankly I’d love to do anything in London again. It’s my dream to live there and get back there! Putting it into the universe now haha!

You performed in another show in the UK – Dido and Aeneas – in Birmingham, how was this?

That was another great moment. I was in the ensemble (called chorus in opera) and got to cover the first sailor feature under Graham Vick. It was a great experience and one of the swing dressers friends, Ally, I met while I was there is now with me in Phantom.

What was it like playing Tenor Tony in the Chicago revival of Terrence McNally’s Master Class?

I’ve only done musicals and opera — Terrence McNally’s piece was the first play I’ve ever done. I went to Chicago to do Master Classright before I went into Phantom. I got to play an opera student studying at Juilliard and now fast forward with Phantom, I play an opera star. It’s really something. I am still very good friends with my Maria Callas, who is one of the sweetest women I’ve ever met in the business. Janet Ulrich Brooks. I adore her. She taught me a lot and we’re very alike. I really hope it goes to Manhattan Theatre Club or somewhere in New York one last time. It’s a piece that artists really connect to and it needs to be heard once again. I’d love to do it if it does. Crossing fingers.

Can you tell us about your experience on American Idol?

It was the first job I’ve ever had in the business. I was nineteen… very green and working on a network television show. I was also bouncing back-and-forth between my sophomore year at university. It was a crazy time and I wouldn’t change a thing. I still keep in touch with a lot of the producers today. I was on that show briefly but it truly busted open a lot of doors I wouldn’t have gotten into.

Directly after American Idol, I did an Off-Broadway show in New York City for a year and got recruited by the GRAMMY-nominated Broadway Inspirational Voices – A company of all Broadway artists from various shows. I was in and out for three years. BIV actually just won a TONY Award for Excellence in the Theatre in 2019. That was really special. I did not get to go because I was with Phantom… but I felt so proud of our Founder, Michael McElroy. He is the heart and soul of BIV.

I wouldn’t have been trusted to be in that room with that high-caliber of people if it wasn’t for working on Network TV when I was a teen. Period.

What aspect of your career do you enjoy the most?

What’s been really fun about my association with two “big hits”, Phantom and American Idol, is that I get to do extracurricular things… Attending new Broadway show openings/walking the red carpet (I’ll still never get used to that), fitting in solo guest artist work at various houses in the US and abroad, teaching… I love what I do so much and I love this business so much so I try to do as much as humanly possible.

We’ve heard you are signed with Phantom through 2021, what are you looking forward to for continuing your time with the show?

I am looking forward to meeting new people first and foremost — we have a cast change coming up and I really can’t wait to meet the new folks joining the Phantom Phamily (yes, with a PH). We are a really welcoming bunch. Listen, this is my dream job, I look forward to doing the show eight times a week. It’s as simple as that. I look forward to growing and learning too. Every new experience and job teaches you something different. I’m so, so, so grateful for the opportunity.