Having joined the cast of the West End transfer of The Secret Diary of Adrian Mole Aged 13 3/4, Rebecca Nardin played the role of Pandora Braithwaite, and whilst in the show, appeared on This Morning for their Back To School section. With her stage career, Rebecca has worked alongside Sheila Hancock and Jenna Russell in Grey Gardens at Southwark Playhouse, and continues her training in acting, musical theatre and dance. Meeting with Rebecca in London, she tells us about being cast as Pandora, appearing on This Morning and her time in Grey Gardens.

How was it performing as Pandora in the West End production of Adrian Mole?

Pandora was such a fun experience and she was an amazing character to play! The cast, crew and creatives were all really lovely, and I loved working with each and every one of them. I learnt a lot from the cast over the course of five months.

What did you know about the show before booking the part?

I didn’t know anything about Adrian Mole before booking the part, but when I heard I’d got an audition for it, I bought and read the book. I didn’t watch the TV series because I didn’t want to get influenced by the actress playing Pandora in it. I have watched some now though, and I’m going to carry on watching because I love Adrian Mole!

As Pandora, what did you find the best aspect of playing the role?

Pandora is such a fun character because she’s a perfectionist and thinks she’s the best at everything. She is also a feminist, she fights for what she believes in and she has all the right intentions, so getting the balance was really hard, but also a really fun and interesting role to play. My favourite scene in the show was probably the Nativity because I had to give birth, and it was so funny and a really fun experience. 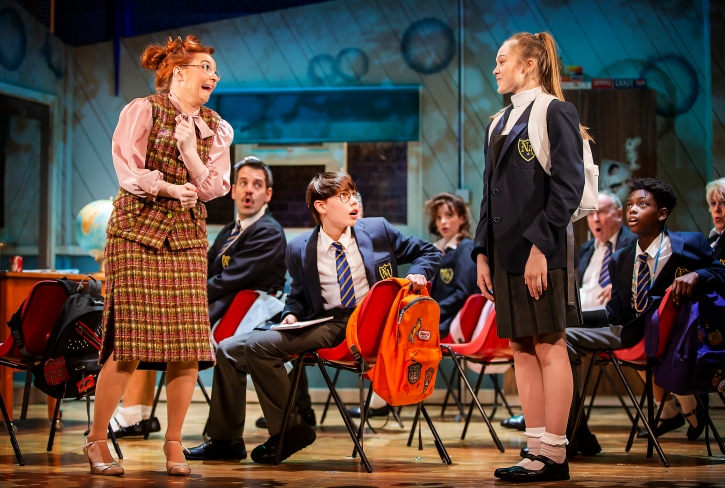 You filmed the show’s trailer, can you say more about doing it?

Did all the cast get together for closing night, and how did you feel on your final performance?

My team finished a week before the show ended, and it was actually my birthday which was really cool! It was really sad, but also a celebration of what everyone had achieved in five months. The composer, Pippa Cleary, spent her time writing songs with us in our standbys, which was amazing! We had a party between the matinee and the evening on the final day and each team performed their song for the rest of the cast and crew. We then watched the final show.

What was the experience like appearing on This Morning for the school uniform section?

This Morning was a really, really good experience because I haven’t modelled or been on live TV before, so it was interesting to see how it all works. Molly May Gibson (another Pandora who I shared the role with) went as well and we had our own dressing room and got our hair done. It was really cool! Ruth, Eamonn and Lisa were really nice, so I would definitely want to do it again.

How was it returning to Ambassadors for Adrian Mole after performing there previously in The Secret Garden?

What do you remember from your professional stage debut in Grey Gardens?

Grey Gardens was a really iconic show, and getting to say I worked closely with Jenna Russell and Sheila Hancock is incredible! Working on this show made me realise how much I love performing and because I am still close with some of the cast, it will always have a special place in my heart.

How did you find your time in the production of The Woman in White?

The Woman in White was directed by the same person as Grey Gardens, so it was really good working with Thom Southerland again. Singing in front of Andrew Lloyd Webber was both thrilling and terrifying at the same time!

What was it like playing Young Violet at the Charing Cross Theatre in Violet?

Violet was a joy to be in because it was such a complex part and I had to experience the same emotions as my older Violet, Kaisa Hammarlund. It was already a surprise to get cast in because I was the tallest out of everyone! The show was so clever and heartfelt, it was amazing.

The music video I filmed, Early Girl, was completely different to anything I’ve done before because I got to take as many takes as I wanted to! I was able to make it my own version of how I thought the character would be. It was really cool watching the final product to see how all the clips were put together.

How did your career come about?

I started off from a very young age at my local dance school, where I got recommended (at the age of eight) to go and audition for a pantomime. My mum wasn’t sure at the time, but we went anyway, and I got the part of number one, which is the smallest out of the twelve, and then did pantomime for another two years. We then saw an audition for a local Annie show at The British Theatre Academy, and I got cast as Pepper in that. That got me into BTA who got me some of the auditions for the shows that I’ve been in.

Can you tell us about your training?

I train at DMA – Dominique Moore Arts, I get my musical theatre training from The British Theatre Academy and I dance at Laine Theatre Arts.

What do you feel you’ve learnt about the industry from performing in different shows?

I’ve learnt to keep pushing forward and that you have to be very focused because this industry is hard. Just because you are not right for a part, it isn’t your fault so don’t let it knock your confidence. You also have to learn to juggle everything because you have to do school and homework as well as performing.

What are your plans now Adrian Mole has finished?

My plans are probably to keep performing! I’m at the ‘funny age and height’ meaning I might not get musical theatre parts at the moment because I look too old to play a younger character. I will keep going and see if I can go into film and TV with A&J Management.