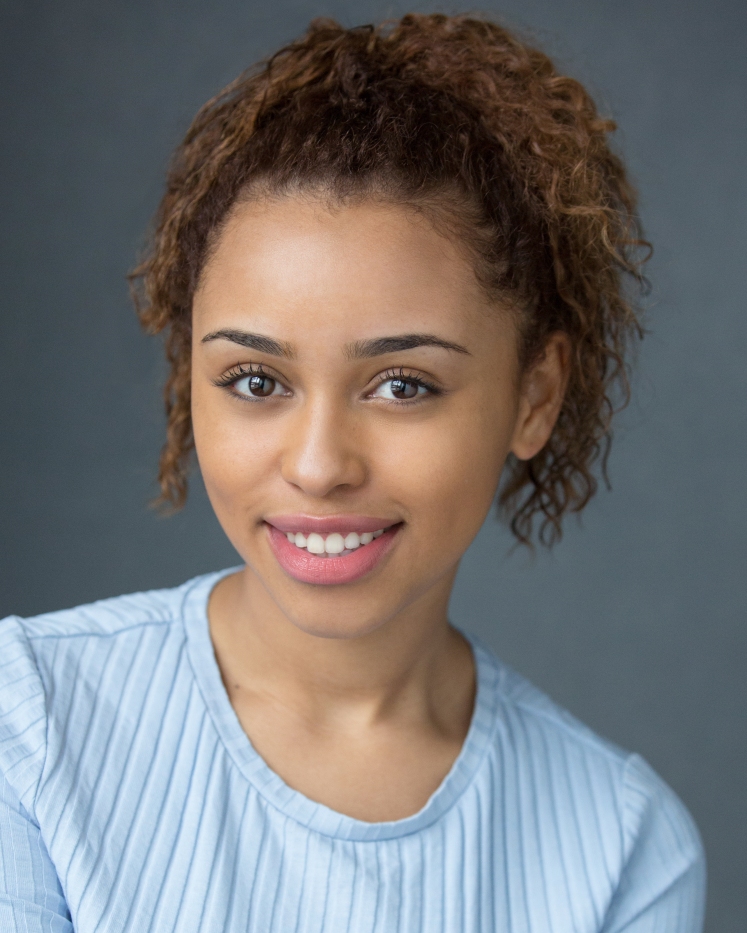 As a series regular in a couple of CBBC shows, Rhianna Merralls started her role of Jessie in Millie Inbetween last year, and joined the cast of Hetty Feather as Flo in their latest series. Rhianna has filmed for the upcoming Christmas episodes of Hetty Feather, and her most recent TV appearance was aired in September, where she played Sabrina in an episode of the sitcom Plebs. Catching up with Rhianna, she talks about filming for Plebs, her time in Millie Inbetween and playing Flo in Hetty Feather.

What is Flo like to play in Hetty Feather and how would you describe her?

Flo is such an interesting character to play. Initially, she comes across as being manipulative and opportunistic; however, as the series progresses, we see her evolve, and she becomes open-minded and tender, mainly as a result of developing friendships. As an actor, being able to play a character that goes on a personal journey like Flo’s is so much fun, because no day is the same, and each episode required me to try to bring out another element of Flo’s changing personality. I would describe Flo as being an intelligent girl, whose upbringing made her harsh and cold, but deep down, she just wants to be loved and protected.

What’s it like on set of the series and how did it feel booking the role?

Being on set is incredible. We film on location in a beautiful Victorian house. The house is filled with so much history, but if you’re sleepy, you sometimes go to sit on a chair, or lean on a wall, forgetting about its value… you have to be really careful not to damage anything (which is hard when you are as clumsy as me). I only joined the cast in Series Five, so the other cast members were already best friends, yet still made me feel like part of the family. When I booked the role, I was so happy. I had been auditioning for three months and was beginning to give up hope as I hadn’t heard anything from the Casting Director for a few weeks, but out of nowhere, whilst I was at the gym, I got the good news. I stopped my workout, drove home and FaceTimed my best friend Bethany Antonia, who is the most supportive friend and told her the news. We screamed a lot!! 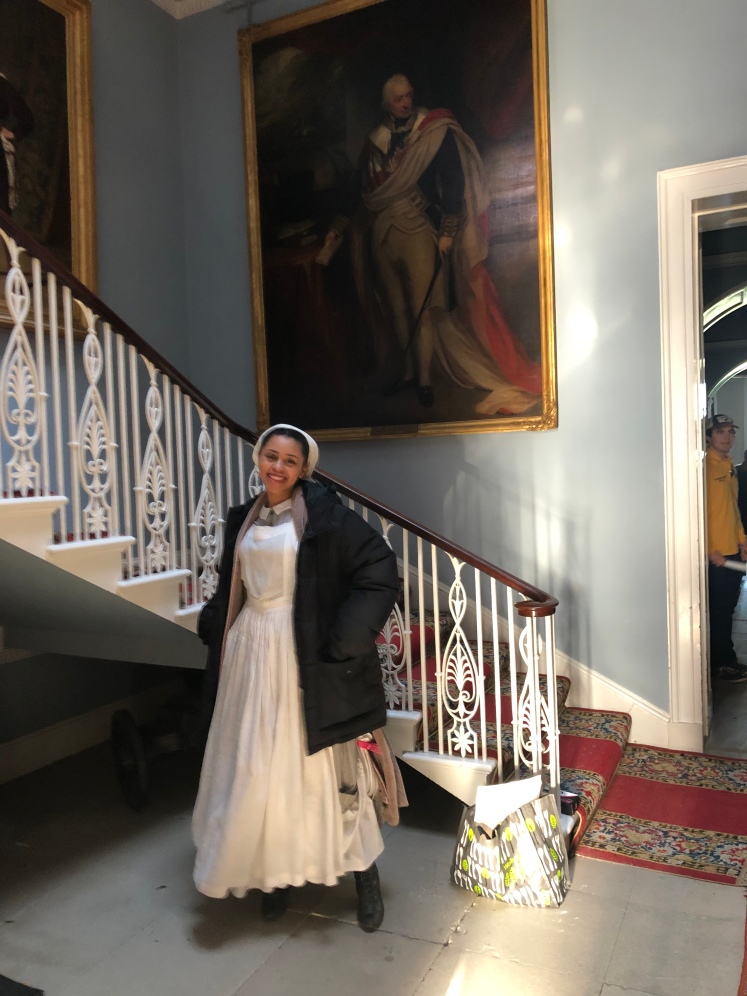 Can you tell us about filming for Plebs?

Plebs is shot in Bulgaria, so it was like a city break and the coolest job ever rolled into one. Comedy is my favourite genre, so being on set with the Plebs was a pinch me please moment. All of my scenes were with Jon Pointing, who plays Jason, and we got along so well, and he made me feel at ease straight away. I spend a lot of time in hair and makeup because I had a full head of hair extensions put in every day, and my hair spray dyed brown, which took a while because I have a LOT of hair. I also got to perform my first ever stunt, which involved a swing and a few men pulling me with a rope. It was technically quite a hard stunt to pull off, and the heat didn’t help!

How different is Sabrina in Plebs to Flo?

Both characters are leaders, they can easily get people to do things for them and get away with being manipulative. However, Flo has gone through challenges growing up, like losing her mother and having to constantly steal and run away in order to survive. Whereas Sabrina is the popular girl, she’s the girl the boys fancy, she’s a party animal, she likes gossip and cares a lot about being cool. Her confidence comes from the fact that people like her and want to be around her. I guess they both want to be liked, but for different reasons.

Are you able to say anything about the short film Gimcrack?

Gimcrack is a feminist sci-fi western directed by Rona Bradley and produced by Annie Mullineux. I don’t want to say too much about the plot, but it challenges the way females are often portrayed in films. I loved my character, she’s very different to anyone I’ve ever played before…

You played Jessie in Millie Inbetween, what was this role like to portray?

Jessie was so much fun to play. She is fun and energetic but also opens up to Millie about her parents’ divorce which she was struggling to deal with. Millie Innes, who plays Millie, and I had to learn a dance routine dressed as a giant love heart, which is something I will never EVER forget. We found it so funny.

What was it like joining the cast of the popular TV show?

It’s always frightening joining a cast of a show that’s been going on for years because you are just hoping they will be welcoming and like you. But Millie Inbetween was just (as cringy as it sounds) a big family. We stayed together in Belfast, and became such good friends and have remained friends all these years later! I am so grateful for those months of my life, and I miss my beautiful friend Mya so much, and so the show holds a really special place in my heart, and I’ll forever cherish the memories.

Can you say about Carters Get Rich and your role of Ellie Carter?

Carters Get Rich was everything I could want in a job and more. I can’t put into words how much I enjoyed that job, and it was mainly due to our director Chris Cottam, who brought out the best in me and made me laugh all day, every day. Ellie was a great character, because she is just in her own world, all the time. To Ellie, nothing is weird, or impossible, she doesn’t overthink and if she did, she would forget why she was overthinking. I think we should all have a little bit of Ellie in us. Roughcut, the writers and the entire cast and crew made my first series regular job beyond perfect.

Having done shows with both National Youth Theatre and RADA Youth Company, what were these experiences like and would you like to do more stage work?

National Youth Theatre was a two-week intense residential course. I did it before I had any acting experience, so I was thrown in at the deep end, but I wouldn’t change it for the world. I made amazing friends. We worked together, played together, and had late nights chatting and getting to know each other. RADA Youth was a weekly course, every Saturday for almost a year. We put on a production of Shakespeare’s The Winter’s Tale, which I loved. I learnt so much and am itching to get back on stage again soon…

Can you tell us about your first screen role, and what do you remember from your time on set?

I did an advert for a phone company in 2014. I remember being very confused because my character lived in Morocco, so I had assumed I’d be flown out and have a little holiday. Little did I know I would be in Worcestershire, in a tiny studio, with a backdrop of Morocco outside my character’s bedroom window. I had a really good time and just couldn’t believe I had booked a role. My parents were so excited and taking loads of photos. We were all on cloud nine.

What TV shows do you enjoy watching?

I love anything written by Ricky Gervais. He is a genius, I’ve watched After Life way too many times. I also like watching documentaries on crimes, I’m not sure why but they are strangely addictive. 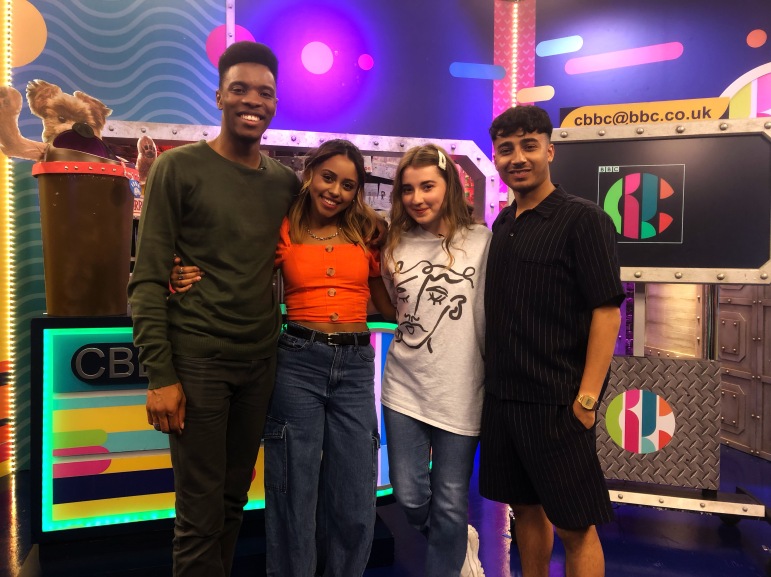 How do you prepare for auditions and learning scripts?

What inspired your acting career?

My drama teachers at school always encouraged me to pursue acting. And my parents supported the idea whole-heartedly and told me that I could be anything I wanted to be, which gave me the motivation to give it a go.

What plans do you have for the rest of the year?

I have the best team of agents who are finding me auditions for some exciting projects at the moment. So, I can’t wait to find out what’s next. I’d love to do another comedy in the near future, so fingers crossed! I went on live TV recently for the first time and really loved it so I would like to give that another go too. I will be back on CBBC in December with some Hetty Feather Christmas episodes!!