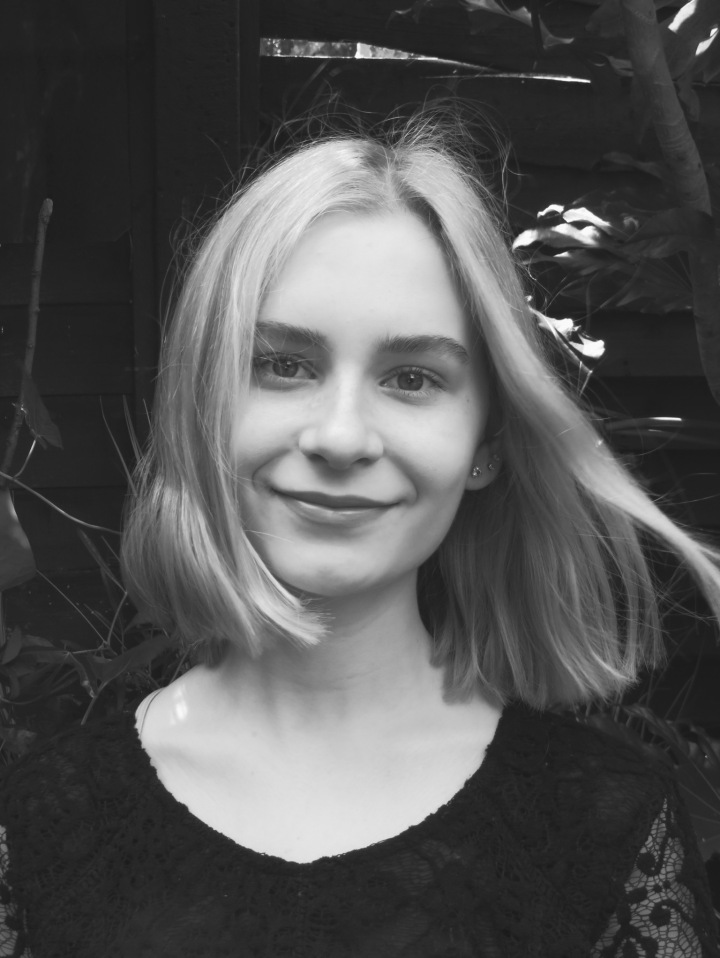 Screen, stage and voiceover actress Ella Greenwood is appearing as Grace Grimston, the lead character in the soon-to-be released thriller Before Nightfall and has recently performed at Monologue Slam and previously at Her Majesty’s Theatre in London. Ella can be heard on the Harry Potter Facts audiobook among other voiceover roles and has also been cast in the upcoming series Moriarty in the role of Simpson. Recently speaking with us, Ella says more about filming horrors, commercial work and her latest projects.

Is there anything you can say about your character, Grace Grimston in the soon-to-be released thriller Before Nightfall?

Grace is a young girl who is just trying to go on with everyday life even though her village is under attack from a creature. She goes looking for her friend who has disappeared in the forest which I guess makes her brave but slightly naive. Luckily, Grace is always accompanied by her dog Rufford, who gives her a sense of security.

How long were you filming and do you know when and where it will be released?

It was all day shoots for Before Nightfall, which was great as night shoots can take a bit of getting used to. It should be released soon and I can’t wait for everyone to see it!

Horrors are difficult to film because you have to portray heightened emotions a lot of the time but they’re also really exciting. I love seeing things like special effects makeup being done.

Do you enjoy watching horror as well as working on them and what other films and TV shows do you like?

I love watching horrors, especially in the cinema because the atmosphere is great. The first horror I saw in the cinema was The Woman in Black and I’ve been hooked since then! I’ve recently been watching classic horrors as well, including Psycho and The Birds. I enjoy watching any type of TV shows and films, recent favourites include The Haunting of Hill House, Eighth Grade and The Society.

You’ve also worked in voiceovers, including Harry Potter Facts, what is this like to do?

Voiceovers are really fun to do and are a lot different to acting for screen as you have to express things in a new way.

I had to make sure I was pronouncing all of the Spells correctly for the Harry Potter Facts Audiobook which was actually pretty easy as I’m a huge Harry Potter fan!

What commercials have you filmed for and what is the experience like filming them?

One of my favourite commercials to film was one for Vitality. It was filmed in a park in London and I got to work with lots of different people and enjoy the sunshine. Commercials can be very fast-paced in terms of casting and production but there can be a lot of waiting around when filming. Craft services are normally amazing though!

You’ve been cast as Simpson in the upcoming Moriarty series, when do you start filming and what are you looking forward to?

I start filming straight after my exams, which is lucky. I’m looking forward to meeting the rest of the cast and to learning more about the Holmes world.

How different is filming a web series to a short film?

The shooting of short films is often more condensed and there are a lot less characters normally involved in them compared to a series. You also often see a glimpse of a situation or world in a short film, whereas web series often cover different situations in a particular world.

Have you always wanted an acting career?

For as long as I can remember, I’ve wanted to act. There was a point when I considered being a deep sea diver after snorkelling round a shipwreck on holiday and another time I wanted to be a microbiologist as I loved learning about infections and diseases, but only for like a week!

What do you enjoy about theatre work?

I enjoy getting to see how the audience responds straight away rather than having to wait for films to be completed. I also love how you perform theatre in the correct order. It sounds silly but with films I’ve often had to film the ending first for example, so it’s great to actually perform the story how it’s supposed to be!

You’ve performed at Her Majesty’s Theatre a couple of times, what is this venue like to appear at?

Her Majesty’s Theatre is such a beautiful and old building and it’s in such a great location. Performing on the stage is an amazing experience as it holds so much history.

We understand you enjoy attending theatre shows, what has been your most recent and which would you recommend?

I recently attended the press night for Emilia and it was incredible. It was super funny and empowering – a great combination, and so I couldn’t recommend it highly enough!

How was it performing at Monologue Slam?

Monologue Slam was a great opportunity and it was so much fun! Everyone involved was so wonderful and supportive, and I loved hearing the other performers’ monologues.

What are your plans for the summer months?

I’ve got some filming and voiceover projects lined up and I’ll also be training with the National Youth Theatre. I’ve got a bit of travelling planned for in-between, as well as catching up with friends, so I’m looking forward to it!