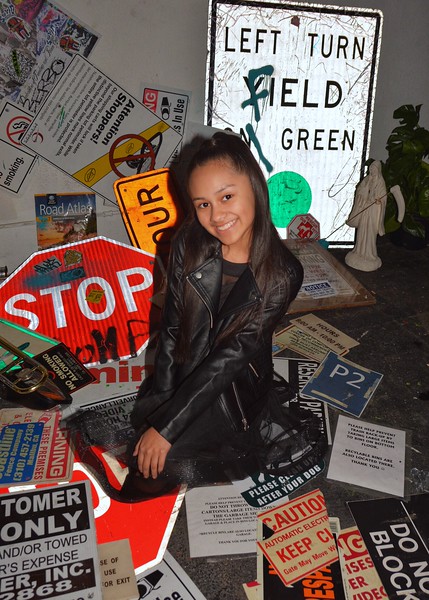 Singer and actress Isabella Leon released her debut single Dance With Me last year and is currently in the studio working on her EP. With her acting career, Isabella has recently been on the set for upcoming horror adventure film BITS alongside Dee Wallace and has previously appeared in The Dog Who Saved Easter in 2014 among a number of short productions. Chatting to Isabella last month, she discusses her new EP, working on the upcoming horror movie BITS and recording her debut single.

Have you always enjoyed singing?

I’ve always enjoyed singing, in fact, I grew up listening to my grandma’s Spanish music, I loved the rhythm of the music and how it connected me to my heritage. Linda Ronstadt and Selena Quintanilla have been the two amazing women people have compared me to. Just like me, they didn’t speak fluent in Spanish, but I had a love for the language that was big enough for me to learn it and sing it.

Can you tell us about your single Dance with Me?

The inspiration for my song is inspired by all the powerful women in my life, from my mom, my grandma, aunts, cousins and friends. My music video featured one of my friends, Nicole Lemus, who I met on this app called TikTok. Nicole was being bullied online while broadcasting live on the app. After I saw all the hateful comments, I knew I had to stick up for her, little did I know a friendship would blossom from this. I was so happy she was able to represent girl power in my music video.

How was the experience filming for the music video and how did you feel when it was released?

My favourite part about being on set and filming was being able to learn about all the magic happening behind the scenes. It gave me chills to see everything come together into an amazing music video.

How long did the recording process take?

There was a lot of growth behind the scenes, it was lengthy process that took about three months. Throughout the process I worked alongside my vocal coach, Dina Alvarez and in the studio I worked with her daughter, recording artist and songwriter, Agina Alvarez.

Are there plans for any live shows?

I don’t have any live shows listed yet because I am currently working on some songs. I’m looking forward to having a release party for my EP soon and there I would be performing all of my songs live for the first time.

We heard you were in the studio recording your EP; how is this going and when can we expect to hear it?

The process is going so well, I’m super excited to release it in the next couple of months. I’m so thankful for the amazing team I’m working alongside, such as Agina Alvarez and Kevin Thrasher.

You appeared in the film The Dog Who Saved Easter in 2014, can you tell us about this role?

At the time of filming that movie, I was only five years old. All I remember was feeling like it was Easter every single day on set and for me at that age was so exciting, it was like going to an Easter party everyday.

What can you say about BITS?

I am so excited to work on this film and it was directed by one of my favourite directors, Mr. Edward Payson. I worked alongside Najarra Townsend, from the horror movie Contracted and Dee Wallace, who played one of the most iconic mothers Mary, in the movie “E.T.”. In fact, Dee Wallace was the victim of my first onscreen punch, rumour has it that I actually made contact. I absolutely love working on the set of horror films especially when working with such an amazing director, cast and crew.

What was it like filming for Life in Pieces?

Working on the set of Life in Pieces was so much fun. I got to work alongside the amazing director, Helen Hunt and actor, James Brolin. It was so awesome to watch and learn from them.

Have you had chance to take on any musical roles in your acting career and if not, would you like to be able to combine the two?

Not yet, but hopefully in the near future. One of my dreams is to do a live musical performance on TV like Hairspray, Grease and Rent Live. It would be absolutely amazing to combine my two favourite passions.

For those that haven’t heard your music, can you describe your style?

I would say my style is very mixed, but my recent single titled Dance with Me is definitely pop ballad. The single expresses what it’s like to be a strong independent girl in our society today. I also love to sing in Spanish! I may not always know the meaning of the words, but I am working on that part.

Are there any musicians you’d like to tour or collaborate with?

I would love to work/tour with one of my absolute favourite artists, Billie Eilish. I love her music and she is such an amazing live performer. I will be filming a cover of one of her songs soon.

Do you hope to release more music videos in the future?

As soon as I finish recording my EP, I plan on filming a music video for one of my original songs. I also plan on filming a music video in the studio of my song Perfectly Perfect, which will be released in the next few months. Perfectly Perfect was inspired by my recent diagnosis of Scoliosis, the message behind was to tell everyone that we are all perfect in every way.

What were your favourite music releases of 2018?

One of my favourite song releases was from Billie Eilish, it was titled “when the party’s over”. I love the melody and meaning behind the song, even though it makes me cry sometimes.

What advice would you give to young musicians starting their career?

I believe it’s very important to stay true to yourself and respect one another. We are all strong enough to stand up and follow our dreams. In the industry, you can’t lose sight of your goals and determination is key to being successful. You have to see the fun side of everything, you’re not always going to book the job.