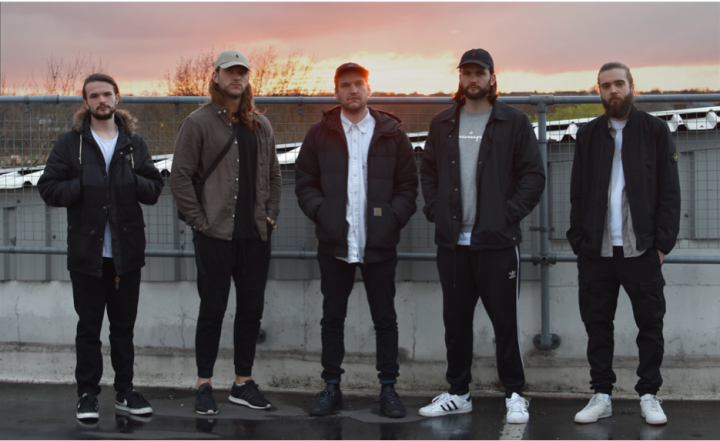 After being listed in NME’s Essential New Music in 2017 feature, Courts are back with their latest single Any of Us. They have a summer full of shows coming up and have already played alongside Madness this year. They discuss their single, the band’s goals and their long list of festivals.

For people who do not know you, could you tell us a bit about you? How you got together and what can be expected from your music?

We’re a five piece band from Basildon, Essex. Chris (vocals) and Dan (bass) started the band when they met in college in 2007. There’s been a few line-up changes since then, but today the band is made up of Joe (drums) who joined in 2009, and Dan’s brothers Reece (keyboard & guitar) and Luke (guitar) joining in 2012.
The sound is a mixture of all our influences – hip hop, soul, funk, grime, disco, rock…
It’s quite difficult to describe the music so we’d say it’s best for people to listen and make up their own minds.

Your new single, Any of Us, is out now. Do you write all your songs together, or are there certain songwriters in the band?

Reece and Chris usually write, or have an idea and then bring it to the band so they can all add their own thing to it to make it Courts.

You’ve played alongside Madness this year, and also playing the main stage at Village Green Festival alongside Nothing But Thieves. Do you get nervous playing these type of shows? They must be very exciting to do?

It feels really good to be playing alongside bands who’ve achieved such a high level of success, something we aim to replicate.
We know eachother inside out where we’ve been playing together for so long, so we don’t really get particularly nervous anymore, we’re more excited to get on the stage and play.

Who inspires you musically?

We’re inspired by pretty much all music which you can hear in our songs. We’re not just inspired by music though; art, film and life generally play an important role too. Our hometown influences everything we do as well, from the music right through to the artwork, videos and basically the whole project. It’s a new town built post WW2, it’s the least idyllic place to live, a typical small town but we find a lot of inspiration in that.

What bands or musicians do you listen to and who do you enjoy watching live?

We listen to so much music individually it would be difficult to list everyone. The new Joey Bada$$ record springs to mind, Giggs, Gorillaz, Tame Impala, it’s so varied. Reece went to see Alexander O’neal at the 229 in London recently and said it was the best gig he’s ever been to. The band were unreal.
When we supported Madness it was really nice to see a stadium full of people coming together like that, all singing along to music they love. That’s what it’s all about.

Who would you like to do a collaboration with?

Nile Rodgers (Chic) if he’s still on it, he reached out to us on Twitter last year and said he wants to hook up at some point. He’s a machine, next level songwriting.

Where would be your dream venue in the world to headline?

Probably Brixton Academy. We’ve all grown up watching our favourite artists there and as venues go, it doesn’t get much better.

Are there any bands you would love to tour with?

To be honest it would probably be Rage Against The Machine if they were to tour again. Everything they stand for resonates with us. You don’t get bands like that anymore.

Where did you play your first show and do you have a venue you still like to play from your early days?

The first gig was at Saks Underground in Southend with the very first line up back in 2007. Our favourite Basildon venue is The Castlemayne pub, we had some really good nights there back in the day. It’s always good to play Chinnerys in Southend, we’ll be back there at some point in the future.

How was it being listed as one of the artists in NME’s Essential New Music in 2017 feature?

It feels rewarding to be recognised for all the hard work we’ve put in. Hopefully we can live up to their expectations and continue to build from where we are now.

What do you hope to achieve in the next 10 years?

Just to be able to make an honest living from music and travel the world whilst doing it. Anything else is a bonus.

As well as playing at festivals, do you like to attend any as fans, if so, which ones do you go to?

Field Day is a pretty sick festival, Secret Garden Party is the best though. It’s a shame to see it go.

Do you have any plans for a future headline tour?

Yeah there’s definitely some exciting talks going on in regards to tours and other bits, but we can’t say too much at the minute.

What shows have you got coming up which we can find you at?

At the minute we’re booked for the London Riviera Festival on 18th June, Village Green on 8th June which is the only local gig we have booked at the minute. Then we have Y Not Festival on 27th June and Lost Village on 25th August. We’re all really looking forward to them, it’s gonna be a sick summer.